This morning I found an uninvited guest in the porch; must have been accidentally shut in last night when I closed the outer door.

I tried to shoo him out with a brush, as I didn’t want to be peed on by way of defence mechanism, but he only turned his toes in and his head away, apparently beyond hope or fear.  So up he came in cupped hands, and was too dry, poor little beast, to waste piddle on my second-best trousers.  I released him under a nice damp hedge and wished him well, but will never know if he lived. 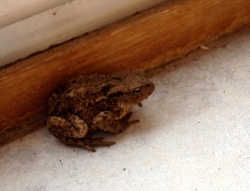 Why do we willingly attribute fear to animals, but consider that ascribing hope is mere anthropomorphism?