and too powerfully written to be ingested in one go, which, nevertheless, I did, emerging, gasping slightly, from one short story only to plunge into the violently contrasting next. This pastel cover should not be believed; the short story form has often tended to the disturbing, and these are no exception.  One of my favourites on first reading: A weight problem by Elspeth Davie, concerning a thin man, an aeroplane, and a short shopping expedition. Life is part of a three-volume collection.  I’ll try to take Love and Loss in smaller chunks. 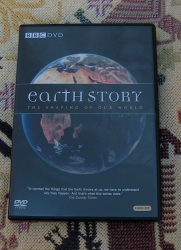 The literary loopiness consequent upon narrative greed obviously required mitigation, and after some thought I settled upon Earth Story, as geology, though as exciting as anything in Life, is usually conducted at a steadier pace.  This series has the usual vices of popular science, and is now out-of-date, but the pictures are pretty.  There are also some entertaining scientists.  My favourite is the one who described early deep-sea dredging, when it was only possible to tell if the dredge had actually arrived on the sea floor by sitting on the cable winch to feel for bumps being transmitted up the cable from, as it were, one bottom to another, a method at once risky and curiously intimate.