The quince tree has a crop.  I recruited some long arms and harvested before the weather could turn and beat them to pulp. 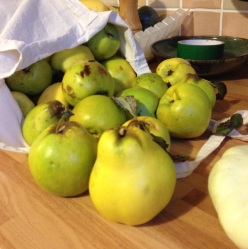 Tonight some of them became jelly.  Somehow there’s always a bit which won’t fit into the jars.

And the entire domestic world is now sticky.  How does it do that?

What are the odds?  Clear sky, a full moon and a total lunar eclipse.  At intervals I glimpsed the bite progressing across the moon, while I tried to go back to sleep.  Eventually it was too much for me and I stuffed myself into leggings, someone else’s socks, and another someone else’s furry slippers, and ventured out half an hour before totality.

It was a night for multiple optical devices: the curve of the shadow was more obvious naked eye; the moon looked its reddest through binoculars; and the detail of the eclipse’s progression was most visible through the telescope.  As the last sliver of moon slid into shadow, true darkness fell.  Indignant crarks from a pheasant were answered from across the field, and they talked across me for a time, though whether they were also suffering from sleeplessness or complaining about the second nightfall is impossible to guess.

The coppered moon glowed dully. In between admiring looks at it, I went cluster hunting with binoculars, and enjoyed the Pleiades and Hyades, M35 sitting like a football in the toe of Gemini, Praesepe in Cancer, and the clumps and streams which decorate the interior of Auriga.

At last the shadow began to slip away, and the moon looked very odd.  The disc of the earth’s shadow is wider than the arc of the moon’s usual terminator, so it doesn’t form the normal-shaped crescent as it moves, and the edge is fuzzy where the terminator proper would be sharp.  Moreover, the umbral edge revealed a strip of moon without shadows, because of the full moon, unlike the long black exaggerated shadows always seen near the true terminator.  There are lots of good images on the web, for example this from the Spaceweather gallery (taken by Jeremy Gilchrist) which looks very like the view from my front garden.

The moon grew back, the Milky Way retired into the widening lunar glow, even the first magnitude stars dimmed, and I retreated to a chilly bed.

under the rotating heavens. But cautiously, to avoid crunching the cruising molluscs.

Time to rearrange the star map in my head with this small-hours preview of the winter sky. No lights, no cars, no moon.  Auriga high, crick your neck for Perseus, Pegasus declining, greet the Twins, is that Leo in the murk, Orion stealing the show (as is his habit).  Our own galaxy shone its arch, and the Andromeda galaxy was a naked eye object. Venus rose; I wedged her encroaching brilliance behind a tree.  Dark, dark, dark; the luxury of the night.

Even more misc. than usual, in fact.

I was potting on some stray radicchio in the vague hope of getting late salad, and listening to Escape Pod.

Odd that listening to a science fiction podcast should be the occasion for finding a story about a potter.

As usual, Stella Gibbons has a word for it.  But I made shift to pick my own spring onions, as they aren’t much bigger than chives.  The harvest also included rocket, green pepper, and a few late peas

… the last of the Latah

…and the first windfall quinces, dry but fragrant on the tongue;

and I will try not to revivify Judith Starkadder in my own person.

Today it was pretending to be summer again.

I puzzled slightly over this ruin on the sea front among the smartened-up apartments.

And what shall we say about this?

This peculiar item was a Bargain in the haberdashery emporium.  I have no idea what to do with it, but something will occur.

I went home to make holes in pots in the gathering gloom :

which made The Hole Book an apposite find.  It is politically incorrect one way or other on every single page.  Others might like to try it.

Adding to the gloom, the squid remained ungrouted.

Flowers which can thrive in a tough environment

A bell buoy tolled in the gusting wind

Hairdrying handles:  the evening was running out.