This one may be a mistake.  Bulky yarns are sometimes unflattering to the non-willowy among us, and the exaggerated slubs may end up looking as if a swarm of caterpillars are marching across my back.

There must be an algorithm to spin in the alternating colours and space out the slubs so that it doesn’t repeat at the same point in each row, whatever the row length.  I tried to work it out in a primitive way.

Not an infallible algorithm, obviously.

You have to pick your moment, and we picked this one well.  (Click a thumbnail for the gallery) Thanks to my co-walker for the extra photographs.

Yesterday a few of us went to see A little chaos, a strange film confection supposedly set in the gardens of Versailles as they were being constructed.  Oh dear; sorry Mr Rickman, but it was pretty bad, a little chaotic indeed and rife with anachronism and cliché. Yet there must be rich stories there, of the people who ordered, planned and built, and of the garden’s growth.  A lost opportunity.  It was like seeing a photograph of somewhere strange, exotic and beautiful, almost entirely obscured by the noisy tourist taking a selfie in front of it.

All fine gardens tell their own stories, weaving in and out of the lives of their passing owners, none of whom ever see the whole story (think Sissinghurst for example).  Even my conventional small garden has its own modest narrative arc.  This week’s instalment has been happening in the vegetable plot.

A plot indeed, which develops subplots and subtexts down the years, elaborating meanings as the story’s characters move in and out. Some of the players are plants, some are animals or people, and some are artefacts.

And another theme running through the story: dirt.  As night fell, I sieved more compost, an oddly satisfying task.  The mixture makes a dark fine bed for the seeds to rest in, looking so welcoming I felt a passing inclination to lie down in it myself.  Memento mori? 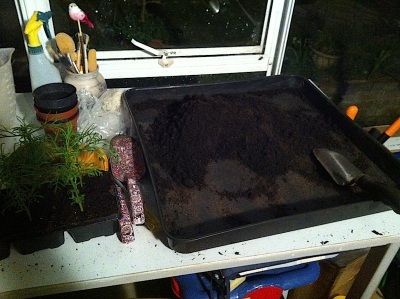 Venus and the moon watch the episodes.  Regularly.

The tesserae made with the gone-off crawling raku glazes are coming into their own.  I need to make a few thousand more bits and pieces before I can finish any designs.

On Monday, time to cement the wol.  Beginner mistake:  I thought the board was square.  It isn’t.  On the butter side down principle, I put it onto the tiles the wrong way.  Of course you can’t lift it up again once it is on, and I had to do some hasty tessellating before the adhesive went off. (The offs and ons in those sentences are a bit confusing.)  This is the largest prototype we have done yet – about 18 inches wide. I don’t know why I should be surprised by the sheer weightiness of the result but I wasn’t prepared for it to be such a solid lump of a thing. 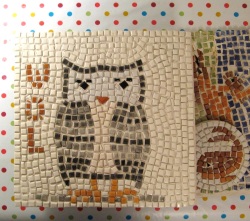 Tuesday I fetched out the solar filter and 5″ scope and took the sun’s portrait.  I am still sulking at Sol and the universe in general, and strove for an I-can-take-you-or-leave-you manner. I doubt this cut any ice with the cosmos.  This whole disc image has been treated to some false colour (if scientists are allowed to do it, why can’t I). 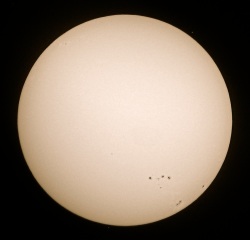 I tried for detail with a shorter eyepiece, but didn’t happen to get anything special.  This was the best of them, showing huge sunspot complex 2321. 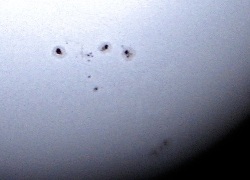 Yesterday I sat by the pond and watched a newt laying eggs.  Gratifying!  It seemed rude to photograph her in the act.

In the evening, out came the 10″ scope, which hasn’t had an airing for some time.  I seemed to spend more time collimating than observing, and the air was thick and turbulent, but the GRS was transiting and I had a few glimpses as it crossed the meridian, suddenly appearing pink and distinct, and then almost instantly vanishing into a vaguely distorted stripeyness on a fuzzy disc.

And this afternoon it was time for some textile crafts – in fact, to secure the ends of this handle tightly together so that the handle wouldn’t fall off seventeen times while mowing. I should stuff this mower up somebody’s nose, but can’t raise the energy. At least it worked and the grass is cut for the next five minutes.

First again this year and always, the (anon) climber by the front door is doing its thing.

It made a good tribute to the day.

I don’t know why I put myself through it.  The last two or three years in the vegetable plot have been uniformly awful, for various reasons.  Today was a busy one,  but there I was this evening, mixing up compost and pushing it through the sieve.

I’ve been pretty mean with it though; most of the seeds in the box are on the elderly side, and I am not sure they will germinate, though I am poking them in. Having poked, I don’t seem to have anywhere to put them and they are cluttering up the kitchen.

In view of the recent past, for twopence I’d turf the lot.  So why do I feel hope creeping up on me?  Obstinacy?  Keeping the faith?  Energised by newt-watching?  Or just because the primroses and violets are so ridiculously pretty? 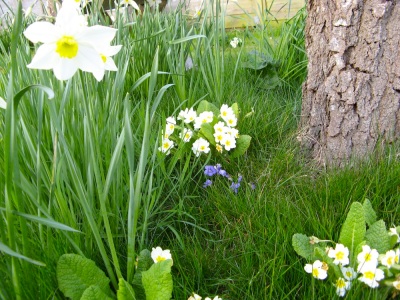 There was sparkliness to a superlative degree;

a reminder of the past lent luxury to the present;

the beaches were only large enough to admit a few very good friends. 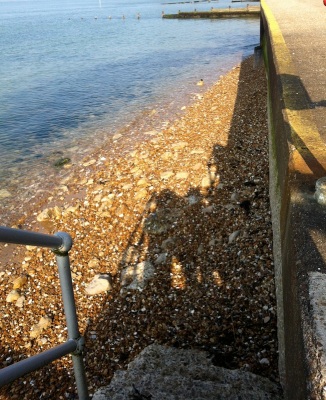 Which to choose?  Sunny or sandy? Stony or shady?

We side-stepped along the narrow umbrageous cavern of the sea wall, where the First Unofficial Paddle of the year took place. 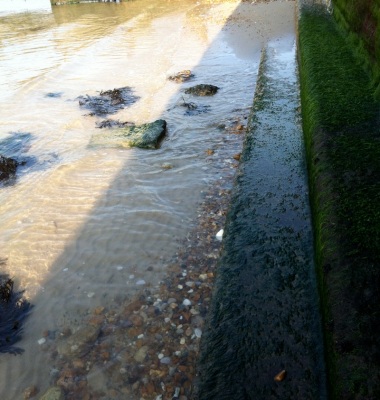 Emerging on a tiny beach, the damp shoes reposed

while the First Official Paddle was instigated. 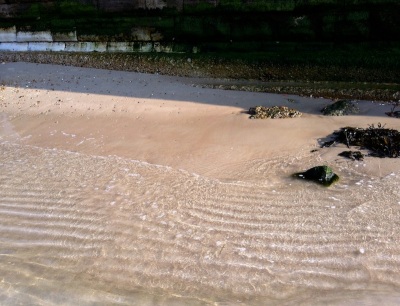 I crept in up to my knees to listen more closely as the seaweed on the groyne chimed and tinkled secretively.

Some significant textiles lost their integrity in an unscheduled and sudden manner.  Mem: it wasn’t me.  Some of the photos belong to the guilty party.  We directed our rigid digits homeward.

Someone local had a bumper crop of cauliflowers.  I know this because it has taken us three days to eat the one in my fridge.

Shoppers being what they are these days, the farmer doesn’t bother to pick anything substandard for colour or leaf, but uses them up as a fodder crop.  Which is why, driving home past his field today, I was unable to tell modest-sized ovids from monstrous brassicas. Their colour and hunch were identical.