My life in half pints (approximately).  The cupboard population is excessive, but how can one choose victims?

It helps if you are a few hundred years old, and composed largely of brick and Portland stone.  (Click a thumbnail for the gallery.)

I can’t make the calculation exactly as this is an audiobook, but I’d say about 17 clichés per square foot.  And please, please Ms Chadwick, do consider that larding your text with archaic vocabulary does not confer cultural authenticity on your characters.

It’s probably kinder not to say any more about this one.  But like other top celebrities, William Marshal is paying a stiff price for fame.

… was necessary as these handsome goldfinches are shy.  I inched towards the grass and snapped one:

Then inched some more and snapped two.  But how I wished for a serious lens!

Listening as I worked, I reflected that it confirmed the unwisdom of official biographies and autobiographies:  maugre the hype, this sounded both dull and sanitised.  Granted, it was brutally abbreviated for the audiobook, but wouldn’t the abridgers make sure the juicy bits were kept in?

Removing paint from the brushes, tray, pots, rollers, apron, hands and hair took nearly as long as doing the walls, but I binned the big roller sleeve with a delicious sense of naughtiness at not re-using it. 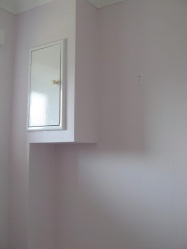 The paint, however, shows extraordinary

chamaeleonic powers, changing radically between morning, afternoon, cloudy, sunny, and artificial lighting conditions.  At the moment I like only three of them.

One of the benefits of gossiping with other readers:  I would never have picked this out but it was put into my hand.  Within two pages I was intrigued and pursued it to finis in one prolonged gollop.

The novel is set in a farming community in a remote bit of the Welsh Marches, the story commencing in the first years of the 20th century,  with a passing hint that Chatwin is aiming to be a modern Hardy with the manipulations turned down.  We follow the generations and connections at one farm, the central characters being a pair of identical twins whose relationship we follow from birth to old age.  It was compelling, comic and poignant by turns.

One of the Joneses is an Amos, and there are a few moments when the tale verges perilously close to Cold Comfort (” – we’m violent folk, we Starkadders.  Some on us pushes others down wells.  Some on us dies in childerbirth.  There’s others as die o’ drink or goes mad.”)  I was unable to decide if this was a misfortune or a silent tribute.

When I opened the compost bin this morning about a pound and a half of worms fell out of the lid.

I’m glad they are happy.

On another tack, I tried a few assorted cables to see if they worked with size nines and a cotton yarn.  Then an hour doing diagrams, counting on my fingers and scratching my head.  Crisp knitted geometry is a great pleasure, but a few bobbles go a long way, and it would be all too easy to end up looking like a rococo sofa from the very worst period.

John Julius Norwich wrote Shakespeare’s Kings to fill in the narrative gaps of Shakespeare’s history cycle, and in chapter 1 remarks that since the 1990s Edward III has been considered part-written by Shakespeare.  As a desultory reader I’d failed to notice this, but Norwich helpfully attaches a text of the play as an appendix, so I started with that.

Most of Edward III is pretty routine, to be honest, and it suffers from the usual problem of all the battles having to happen as ‘noises off’.  A few sections have a life even cold on the page – for example Warwick’s predicament when he has to persuade the Countess of Salisbury to accept the royal seducer, while also persuading her not to.  I also rather enjoyed the lines in which Audley encourages an intimidated Prince Edward (the Black Prince) to face his own mortality at Poitiers:

Is it fair to hear an echo of Jacques?  And what a fine paradoxical figure, to image life as the shadow cast by death.

I don’t take much notice of sheep but obviously they get processed anyway.  Yesterday I found myself staring at a hillside-full of woolly ones.  It took me a minute to work out why:  they had arranged themselves into the exact pattern of the Big Dipper.

Gardening must be losing its charm.  I found myself deliberately leaving out the name labels to make it more interesting when the seeds come up.  Hmmm… 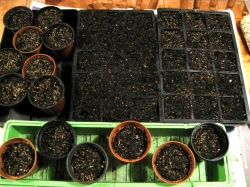