It was supposed to be daytime

I know where the story is going, but I’m hopelessly hooked again:  cleaning the bath by guess, with a cloth in my right hand and Aubrey and Maturin in my left.  As always, their world grows up in the mind’s eye, its sights and sounds and smells, its language and conventions.  Occasionally I pause to wipe tears of laughter.  There are twenty books in the series, and H.M.S. Surprise is the third; this will take some time. 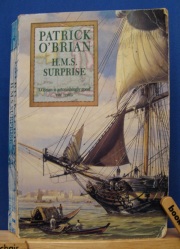 Too unsafe to be on the promenade

I tried to take some storm photos on Monday (6th) but seem to have been largely defeated, mostly by huge waves breaking over our normal vantage points, by the splashes and spray coating the camera,  and by the fact that I couldn’t stand still in the buffeting wind.  The promenade was dangerous and no-one was fool enough to try it; the cars parked behind the second sea wall had water surging between their wheels; seawater ran down the turfed revetment, across the road, and filled up the car park.

The waves were thick and curdled with rage 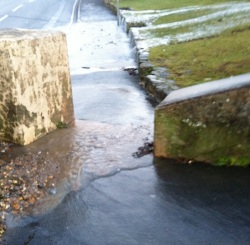 I paddled through the overflow down to the road

Extracts from the accounts written by four British civilians of the progress of World War II from their somewhat impeded viewpoints.  The fascination of diaries:  sent by current instalments to the keeping of the Mass Observation Project, they could not be re-written, polished, adjusted, moderated, or dramatised with the benefit of hindsight.

One of the writers in particular has a great eye for the odd and unpredictable – for example his account of ‘a pious old chap … who has been bitten by a crocodile and run over by a bus …’ enjoying an air raid through his ear trumpet so as not to miss anything.

The main impression given by all the writers is of the sheer daily awkwardness and difficulty of maintaining life, while war work and war weariness grind them down.  A diarist summarised the somewhat double-edged effect:  ‘If all the psychologists in the Kingdom had been given the job of devising a way of keeping the women folk from worrying about the war, they could never have devised anything that would do so more effectively than Lord Woolton and his points’ (i.e. the points system for food rationing).

The war ends, but very slowly; the end of the blackout seems to have been the most appreciated change.  One author took down her blackout curtains, reflecting wryly:  ‘What are we to do with the curtains now? … I think they could be cut down for knickers, and we would get enough pairs to last us both for twenty years.’ I’d love to know if she did.

A loud, almost metallic, bang stopped conversation in its tracks.  After a short pause to regroup, I went to seek the source.  Bits of roof falling off?  Car accident outside the house?  Apparently not.  The first clue was an indescribable stench in the back garden.  Lavatory fallen off 747?  Drain cover blown up by accumulated methane?

No;  in a corner stood a forgotten bottle of home made nettle plant food.  But now it is only half a bottle.  I reeled in the concentrated and fermented stink of a brew which is unnameably vile even when fresh.  It is creeping into the house through  closed double-glazed windows.

The tricky part is, there is a second bottle.  Intact.  So far.  So what is the game plan?  Safety goggles and long tongs, put it in the field and wait for a cow to tread on it?  Phone bomb disposal?  Advice, please, chaps!