Monday was the walking day.

A few hours of Sunday wandering to find my way around:  not exactly dry but not entirely raining.   (click into thumbnail for gallery)

A rainy Saturday in Wales is wetter than anything except a rainy Sunday in Wales.  Luckily the microcosm of a thousand years of Marcher history which is Tretower Court was within reach.         (Click into a thumbnail for the gallery)

The preoccupations seemed random: the difference between stoats and weasels; the construction of concrete pontoons; the fallacy that scientists accept theories for which there is evidence; the terrifying melange of bikes and buses which is Oxford.

I am posting from my phone, not sure how that will go!

This one is a steep series of terraces of flinty cobbles, which the sea has arranged slightly by size.

Where all are the same, a chalk pebble takes the attention 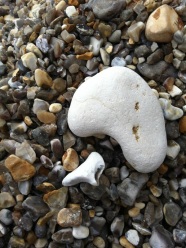 and it becomes necessary to give it a story.

Once I made it different, I left it for the sea to make it the same again.

… has mislaid a book.  I don’t think they are looking for it.

This is a post-WWII reprint of a novel written post-WWI, and might well have been chosen as bracing material for discouraged youths (and their instructors); it had status as a minor cult classic and enshrined a comforting, Scottish, absurd view of what Englishness might have been before the world changed so.  In 2013 one needs to don the pink specs of wishful thinking, but once they are on this jeu d’esprit can still work.

Even in satirical moments, we know Macdonnell loves us really, and his affection flatters us. He shrugs with amused despair, rather than raging, when, to deal with severely shell-shocked veterans, the Army appoints an expert whose ‘only qualification … was an unrivalled knowledge of the drainage system of the insalubrious port of Leith’.  He is bemused by those bizarre foreigners, the English, for example the fearsome horsey woman met in a small village, who ignores the narrator, Donald, and shoves him negligently into a hedge with her horse’s bottom:  even while he is maddened by the rudeness, ‘Donald recognized her … as one of the nurses in a hospital near Hazebrouck.  … One pouring wet night when the hospital … was being bombed … this hard-faced Diana carried out seven wounded officers from a burning ward into which the stretcher-bearers refused to go … to the accompaniment of a full orchestra of machine-guns … And on another she told the Matron what she thought of her.’  And then there are vignettes of a comical, louche and disingenuous London society – a more literary Wodehouse, or a gentler Waugh.

The most famous segment of the story, though, is the village cricket match, one of the classics of that genre in English literature.   I wouldn’t dream of telling anyone who wins; but the account of the skied ball which ends the match is a pocket epic.  And one can enjoy it with full conviction, highly-coloured though it is, since cricketing fact at any level is so often stranger, funnier and more dramatic than its fiction.  (Consider that apotheosis of the game, the last day of the Second Test at Edgbaston in 2005 – I can feel my pulse starting to gallop even now.)

I did a minibeast survey in the garden this afternoon, and I’ve decided I need a better wildlife book as I can’t put a proper name to most of these. Bees and bumble bees, hover flies, lots of other flies, ranging from the gorgeous to the intimidating, a bug and a cricket, a few spiders, […]

After running an errand, I took an unplanned walk on a sliver of coast I had previously missed visiting.  The day was bright, but a strong breeze was blowing and whipped my hair into chaotic knots.  This, plus the fact that I was wearing garden shoes, a dress blobbed with clay, and a cardigan chosen […]

How many ways of making colour?  Or rather, of animals causing other animals to see colour, accepting Andrew Parker’s proposition that colours are a figment of the imagination (i.e. signal processing in the brain).

Pigments – certainly, though some uses of it are exotic (cell bodies which can be expanded at will to display or hide their colour). Then there are multilayer reflectors, chemical bioluminescence, light scattering, fluorescence, unexplained optical illusions which make black-and-white look green, polarisation, mirror effects, and most bizarre of all, ‘shrimpoluminescence’.

‘Nano-cam’ got on my nerves after a while, and the point about Darwin not needing to worry about the perfection of the eye was excessively laboured.  However, the explanations were lucid, the digressions entertaining, the creatures fascinating, and there is much to be learned about the workings of light and vision in humans and other animals.