Vegetables!  Not many, and some not as good as they should be, but there were moments when I thought the whole veg plot would have to be written off.  Many of these turned into a cheesy vegetable bake.

Kale: this represents a world record, as I have literally never grown a successful brassica before.  Usually if they don’t bolt in a drought, the slugs and caterpillars strip them to the stalks. 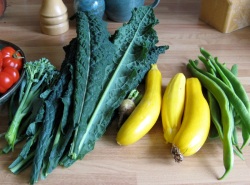 I don’t know that it was worth enduring all that rain in order to get it, though.

Last night the sky was clear (hurray) but the gibbous moon was in the west (boo).  And there’s me with the 10″ scope out to make sure it is all in order and I’ve not forgotten what to do with it, and wanting to revise the fuzzies in Scutum.

In normal circumstances, I’d compound with Fate, and observe the moon for an hour or so.  And the moon does look fantastic in the 10″, though so bright that I need a filter to reduce eye strain.

However, because the 10″ is a Dob, it sits low to the ground,  and the moon was behind the hedge from the scope’s point of view; so, ludicrously, the moon was unobservable, but still well above the horizon, making everything else unobservable too.

So I just tested the works.  The scope still goes.  And I found M11 by pure guess in a bright sky using Altair as a pointer (down a bit, right a bit, down a bit…).  It was washed out by the moonlight, but still coruscating palely in the eyepiece.

Yesterday required distraction while I got on with things. Familiar stuff is good, as one’s attention can hop to and fro without losing the thread.

Swathes of Radios 3 and 4 and ClassicFM, of course. 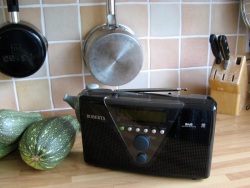 I’m resigned to the hacks made to Mrs Gaskell’s plot and to the lines she gives her characters in North and South, but if they were going to commission music, couldn’t they have paid for more than one tune? 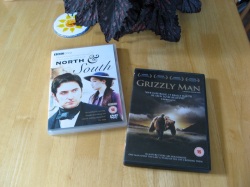 Grizzly Man is another thing altogether, not an easy watch unless you have a strong stomach and little imagination, and rather than using it as a distraction to tolerate the doing stuff, the doing stuff is the distraction to make watching the film more comfortable.  Not that you see anything gruesome:  Werner Herzog knows a trick worth two of that sort of thing.  The shot in which we watch someone watch Herzog while he listens to a tape of Treadwell being killed by the bear is an extraordinary sequence.

After that I needed the All Time Comfort Film:  The Dish.  Every home should have one.

Theme hunting. It wouldn’t suit Minutiae, but may do for the new one.

Still WordPress, but it couldn’t be less like this one.  I have been delving into the mysteries of how half a dozen different themes work to support the new blog, and have finally found one with four columns and photo header which (nearly) meets the spec (the one above had annoying habits).  I’ve also experimented with page creation, blogrolls, stickies, featured sidebars, online forms and widgets of all sorts.  The RSS feeds were awkward so-and-sos, but I’ve (almost) beaten them into submission now.

I told you it was different.

Nothing to do with this post, but it came into flower yesterday and it has been a LONG wait

Last night:  A white figure dons a mask.  A small leap and a spring, then on guard.  The foils rattle together, a neat advance, retreat, and next the attack.  It isn’t the Great Leslie, but it is one of his belated unlikely heirs.

The sun is shining.  It was 28 degrees yesterday instead of 14 degrees last week.  The washing is drying.  And the stars came out.

Tuesday night I faffed about collimating the 5″ (a lost cause as the focuser draw tube is so rickety now) and then had an hour to wander.  You couldn’t call it an observation; more a case of calibrating naked eye/binocular/telescope views again, and getting a few basic star hops from A to B re-established.

I re-acquainted myself with the constellations, hurrying because darkness falls so late and I had to get up in the morning. Then I hunted up a few Messiers to get my eye in.  It was comforting to see the usual suspects again – M57 (Ring nebula), M11 (Wild Duck cluster), M27 (the Dumbbell), M31 (Andromeda galaxy), M13 (the glob in Hercules).  And I finally had something to write in the observing log.

Last night there were more stars.  In the brief observing session I inched down through Scutum looking for Messiers.  M26 was a small, faint object with a 25mm eyepiece, but is arranged in such a distinctive pattern with Epsilon and Delta Sct that there can be no mistake.

I got a bit lost then and can’t decide if a starry clump was M18 or M24, as I haven’t consciously seen either of them before.  After some randomness looking for M17 I saw something nebulous, and this time had the wit to sketch it.  Again, a distinctive pattern of stars confirmed that this was the Swan/Omega.  Another first. And the navigation is coming back to me.

It was a night to stay out until 4 but I couldn’t let myself do so.  Oh for a clear weekend and the 10″ scope!

Last night I went for a paddle.  I strolled down the tideline with the moon dropping towards the sea, hot streaks of sunset still in the west and a perfect blue rising in the east, and the smell of woodsmoke and sausages wreathing from the fire of a few other happy beach-goers.  By the time I came back the moon was making the proverbial but spectacular path of silver across the sea right to my feet, and the first stars were popping out.

(Pity I forgot to take the good camera.)

Occasionally there was an elusive third moon, momentarily forming on a wave. I wasn’t clever enough to catch it in the act.

Two moons walked with me: the placid parent in the sky and the wayward offspring hopping and wavering along the wet sand and in the tide pools.

The last sunset glow shone on the water 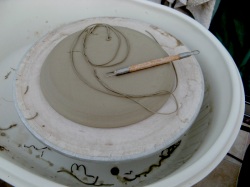 If the clay is just so and the blade of your turning tool is sharp and clean, turning a pot becomes hypnotic.  Threads of clay loop and festoon smoothly away from the blade as it cuts steadily from centre to rim, and sometimes you just forget to stop…  and suddenly there is another bottomless pot.

This hasn’t been an option for some time owing to our pathetic summer, but waking at 4.15 (BST) I did as I always do and peered through the curtains. Instead of the usual blank clouds I saw Venus and Jupiter rising spectacularly together, and bundled myself out.  I basked in their effulgence for a little while, and then RAN the 5″ scope from where it has been parked for two mortal months.  So I had a chance to look at Jupiter’s moons and the fat crescent Venus for fifteen minutes as they paled into the dawn sky.

There’s a reason why astronomers call their small telescopes ‘grab and go’. NB mine needs collimating.

Last night I went to the local cinema to watch a recording of The Fairy Queen, made at Glyndebourne in 2009 – I suspect as an advertisement for the revival of the production, which is happening at Glyndebourne this week.  This was a deeply peculiar experience.

The music comes from Purcell, and contained no particular surprises; played by the Orchestra of the Age of Enlightenment, it was of course beautiful.  All the opera screenings I’ve been to have been long, so I was ready for the four hours it took.  In my musical ignorance, I was less prepared for the action.

The programme described The Fairy Queen as a ‘semi-opera’, which in the 1690s seems to have been some sort of halfway house between straight drama, masque, ballet and opera.  The story line was what the Restoration thought Shakespeare ought to have written as Midsummer Night’s Dream, with actors performing a segment of the play, then standing aside for musical interludes and dances in a slightly bewildering sequence.  There was no attempt to recreate period dance (which seems a little odd when period instruments are so carefully used), and costumes were from an eclectic mixture of periods and could best be described as wacky.

The modern dance and costumes were interesting and mostly enjoyable (though the cultural mismatches could be distracting), except when a troupe of dancers in rabbit costumes performed a routine in which they did what rabbits do best.  It wasn’t the crudity which was the problem, so much as the rather tacky rabbit suits.  If the project designers wanted to tease the audience, they should have spent a bit more money on it.

If you fancy taking in some highbrow cross-media weirdness, highly recommended!